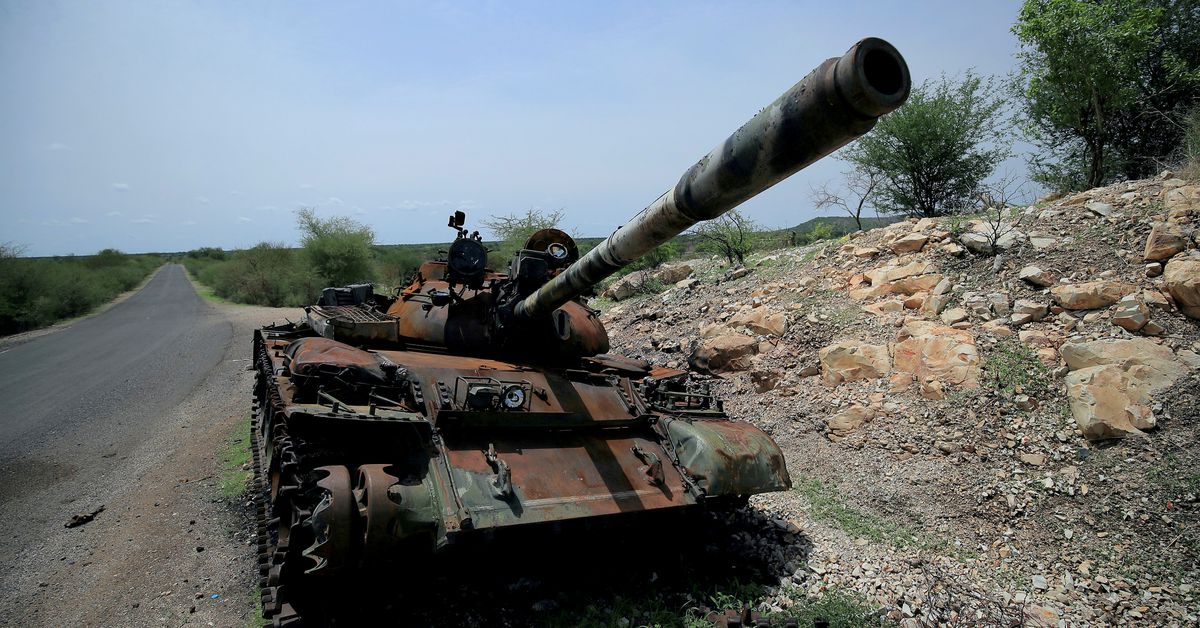 A tank damaged in fighting between the Ethiopian National Defense Forces (ENDF) and Tigray Special Forces stands on the outskirts of the town of Humera in Ethiopia, July 1, 2021. REUTERS / Stringer / File Photo

ADDIS ABABA, October 18 (Reuters) – Tigrayan rebel forces on Monday accused the Ethiopian government of launching airstrikes on the capital of the Tigray region, although the government denied the information.

The reported attack follows increased fighting in two other parts of Ethiopia, where the central government army is trying to reclaim territory taken by the Popular Front for the Liberation of Tigray (TPLF) from the northern province.

Tigrai TV, controlled by the TPLF, said the attack on the town of Mekelle killed three civilians.

A resident of the city told Reuters that a strike struck near a market, behind a hotel. An aid worker and a doctor in the area also said there had been an attack and a diplomat shared photos of what they said were the aftermath, including pools of blood and broken windows.

All asked not to be named. Reuters could not confirm the authenticity of the images.

“Terrorists are those who attack towns containing innocent civilians, not the government,” Legesse added. He accused the TPLF of killing civilians during fighting in neighboring areas.

Reuters could not verify any of the accounts in an area closed to journalists.

“I WAS A FEW METERS”

War erupted in Tigray almost a year ago between the Ethiopian army and the TPLF, the political party that controls the region, killing thousands and forcing more than two million to flee.

Tigrayan forces were initially pushed back, but recaptured most of the region in July and pushed into neighboring areas of Amhara and Afar, displacing hundreds of thousands more. Read more

A week ago, Tigrayan forces said the army had launched a ground offensive to drive them out of Amhara. The army admitted on Thursday that there had been heavy fighting there, but accused the Tigrayan forces of having started it.

Reporting details of Monday’s airstrike, Tigray TV said the first strike hit the outskirts of town, near a cement factory, while the second hit the city center.

A doctor in the area said he heard the first attack on Monday morning. “I first heard jet noise and also an explosion from a distance,” the doctor told Reuters.

â€œThen in the afternoon there was another sound, which sounded closer. This one seemed to be happening inside the city,â€ the doctor said.

A resident of Mekelle told Reuters that around noon (0900 GMT) a strike struck near a market behind the city’s Planet Hotel in the city center.

“I was a few feet away, I thought they had hit our enclosure,” said the resident.

TPLF spokesman Getachew Reda tweeted: “The # AbiyAhmed Air Force has sent its bomber to attack civilian targets inside and outside #Mekelle,” referring to the Ethiopian Prime Minister Abiy Ahmed.

Diplomats fear the resumption of fighting will further destabilize Ethiopia, a nation of 109 million people, and worsen hunger in Tigray and surrounding areas.

Allison Williams quits ESPN on vaccine tenure: “I can’t put a paycheck on the principle”