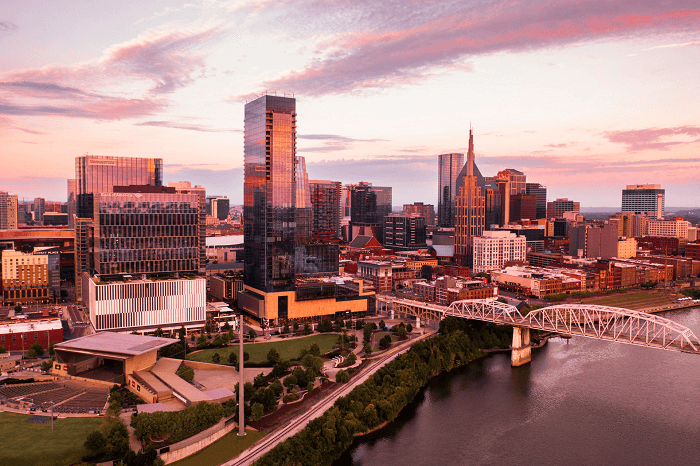 Music City got a brand new signature property this week with the opening of the Four Seasons Hotel and Private Residences Nashville.

The hotel is located on the Cumberland River, within walking distance of the Ryman Auditorium, the Country Music Hall of Fame and not far from downtown. It is also a short distance from Nissan Stadium, home of the Tennessee Titans.

“There is a great synergy between this city and the renowned Four Seasons style of hospitality,” said Christian Clerc, President of Four Seasons Hotels and Resorts.

“With each new opening, we seek to be part of and contribute to the local culture and community to create truly authentic experiences for those who visit us. Here in Nashville, the connections we have forged have come so naturally through to the city’s quintessential southern hospitality., and we couldn’t be happier to be here.”

The establishment offers 235 hotel rooms and suites. Rooms range from the 404-square-foot Superior Room, to the 402-square-foot River View Room, and the 449-square-foot Premier Corner Room. The hotel’s suites include a 670-square-foot Executive Pool View Suite, a 900-square-foot One-Bedroom Suite, and, the best deal, a 2,238-square-foot Presidential Suite.

The hotel’s dining options are highlighted by Mimo Restaurant and Bar, named after Tennessee’s state bird, the Mockingbird. This restaurant offers a family menu of classic Italian dishes with local ingredients, including homemade pasta, bread, pickles, and more.

Elsewhere, the hotel also offers the signature The Spa at Four Seasons brand and a 24/7 fitness center adjacent to the spa and overlooking the resort-style pool deck on the 7th floor of the hotel. the hotel. This pool will soon have its own restaurant called Riviera, which will offer drinks and meals.

For meeting space, there are two divisible ballrooms and half a dozen additional meeting rooms, all of the hotel’s 5.e floor.