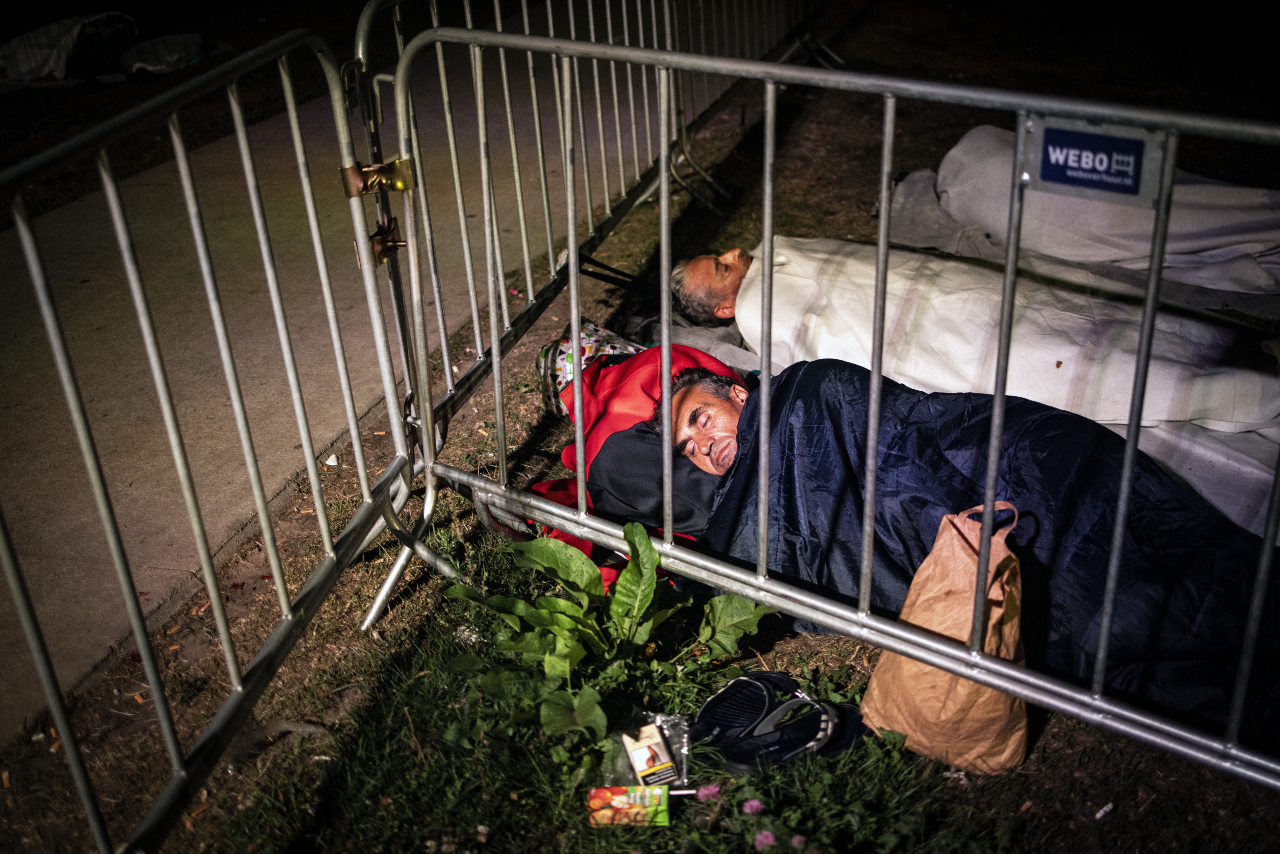 Asylum accommodation agency COA has moved 150 refugees to a gym in Apeldoorn in a bid to alleviate chronic overcrowding at its Ter Apel reception centre.

Despite the emergency measure, around 700 people passed Thursday evening in front of the gates of the establishment in conditions described by Doctors Without Borders as “inhuman”.

MSF, which usually provides medical assistance in developing countries, is providing assistance in the Netherlands for the first time to hundreds of refugees living under makeshift canopies on the grass outside the entrance.

Workers said they found pregnant women and people with chronic illnesses among the crowd. A man who had suffered a heart attack and another who had no insulin to treat his diabetes were taken to hospital on Thursday.

Others developed skin problems after not washing for a week, while dirty toilets and lack of showers were described as a health hazard. Inquests are also ongoing into the death of a three-month-old baby who slept in a gym inside campus.

Local authorities ordered the tents removed from the area on Wednesday after reports they were being used to store weapons and illegal substances, while tent pegs were thrown during fights.

The COA said the 150 refugees would be accommodated in two sports centers in Apeldoorn for up to four nights before being transferred to Doetinchem, local newspaper De Stentor reported.

A local resident, named Huib, said locals were notified on Thursday afternoon of the arrival of the refugees.

“It’s no surprise given the situation at Ter Apel where they come from. Everyone has seen these inhuman images. And they’re only here for a few nights.

The association of local councils VNG said it hoped to reach an agreement on Friday to provide additional emergency accommodation, but the government would have to spend hundreds of millions of euros to cover the costs.

Tilburg Mayor Theo Weterings told Nieuwsuur: “It is really necessary that all parties find a solution. I assume Cabinet will have a good deal on the table tomorrow that we can agree on. An essential set of measures that we must see now.

The issue was further complicated when the owner of a hotel in Tubbergen which the government bought to house 300 refugees, bypassing the local council, said she wanted to back out of the sale.

The COA said it would seek a court injunction to force the sale, sparking protests in the local community from people who said their voices were being ignored. “The huge pressure on COA capacity means that every place counts,” a spokesperson said.

In Ter Apel itself, around 500 people, including local residents, staged a protest march calling for the closure of the shelter.

Protesters carried banners with slogans such as “We want Ter Apel back!”, “We’ve had enough of these problems” and “Real refugees are fine, troublemakers out.” Others carried familiar inverted Dutch flags in response to recent farmer protests.

Thank you for your donation to DutchNews.nl

The DutchNews.nl team would like to thank all the generous readers who have donated over the past few weeks. Your financial support has helped us extend our coverage of the coronavirus crisis into evenings and weekends and ensure you are kept up to date with the latest developments.

DutchNews.nl has been free for 14 years, but without the financial support of our readers, we would not be able to provide you with fair and accurate information on all things Dutch. Your contributions make this possible.

If you haven’t donated yet, but would like to, you can do it via Ideal, credit card or Paypal.