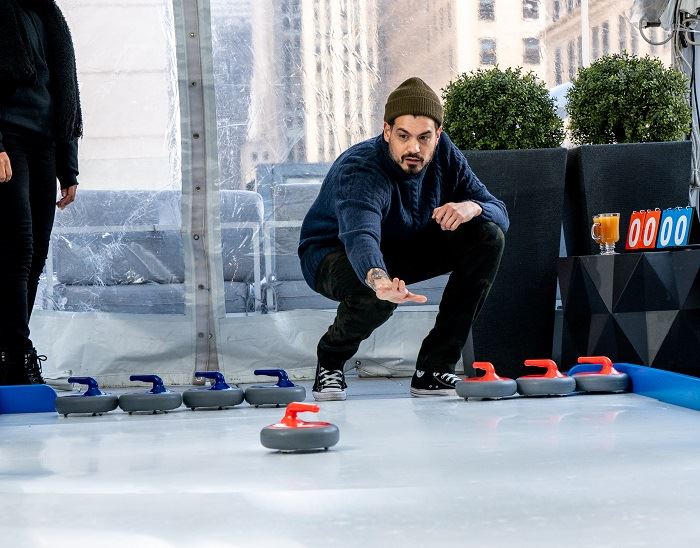 The M Social Times Square New York invites guests to get into the Olympic spirit ahead of the start of this year’s Winter Olympics.

This week, the property launched the first-ever curling rink in a New York hotel on its rooftop bar and lounge called Beast and Butterflies. The rink is available to guests and non-guests and costs $30 per person for a 45-minute session in addition to the 52n/a street hotel. It is open from noon to 10 p.m. daily.

As New York City saw temperatures as low as 12 degrees last week, guests will be able to curl up at the rink in a heated, weatherproof tent while sipping a drink from a cocktail menu curated by Frank Caiafa, author of the Waldorf Astoria Bar Book.

The view from the social perch of the hotel. Photo: M Hotels

“As we approach the Winter Olympics, we know what an attraction sport curling is, so we look forward to being the only hotel where guests can show off their skills in the city. This will further introduce New Yorkers and visitors to the beautiful Beast & Butterflies space and showcase the breathtaking views we have to offer,” said William van Wassenhove, Director of M Social Times Square New York.

Overall, the hotel offers 480 rooms within walking distance of some of New York’s most popular attractions, including the Theater District, Central Park, and Fifth Avenue.

The hotel is also participating in NYC Hotel Week, the newest addition to NYC’s Winter Outing, a promotion with hotels across the city offering 22% off stays (until February 13).