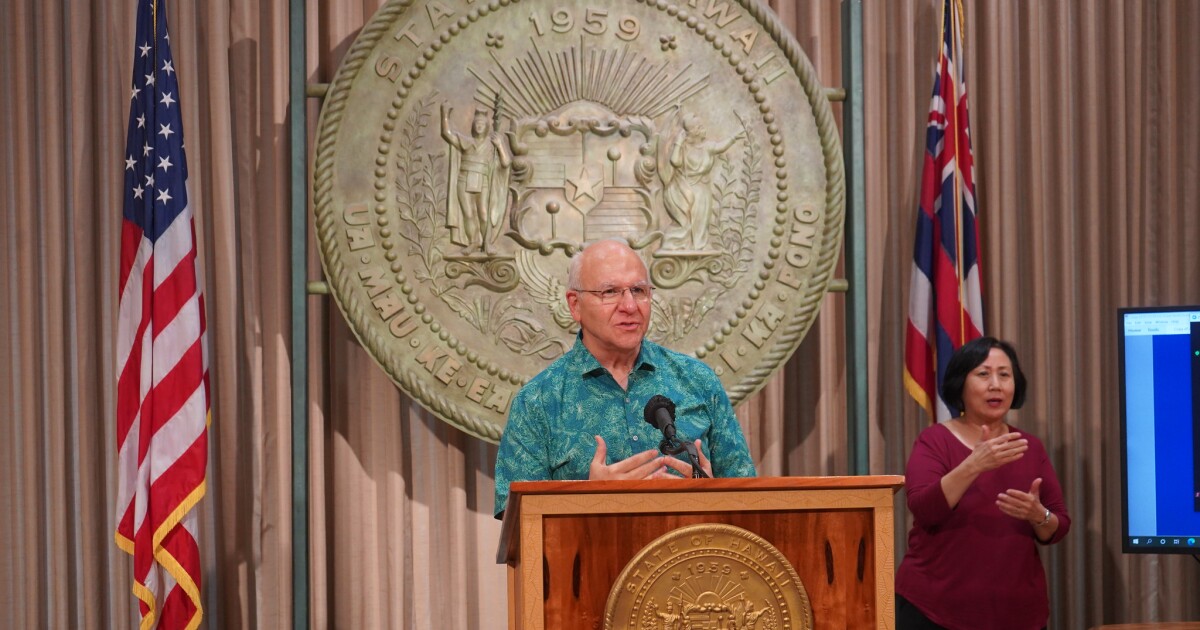 The first of the month has been a busy day for Honolulu Mayor Rick Blangiardi. County moved forward with lifting some COVID-19 restrictions just as news of the first Omicron variant case broke in the United States

O’ahu’s restaurants, bars, and gyms no longer have social distancing requirements. Limits on social gatherings, previously 10 indoors and 25 outdoors, have also been lifted – and large events are allowed at full capacity.

Honolulu City Council also approved a 3% tax on temporary accommodation, allocating between one-third and one-half of revenues for the city’s rail transport project. Bill 40 now goes to Blangiardi for a signing.

Blangiardi spoke with The Conversation about COVID-19, the water problems near Pearl Harbor and the new tax on hotel beds. Despite recent successes in his administration, the news of the potentially contaminated water loomed large.

On reports of the smell of fuel coming from faucets connected to the Navy’s water system. This interview took place before the Hawaii Department of Health’s preliminary testing of Red Hill Elementary School water samples detected ‘petroleum product’

RICK BLANGIARDI: It’s scary if you think in terms of the possibilities here. I think the biggest concern, obviously, is that you know, this is a very potentially harmful material and it can really contaminate. And so obviously, this is a real public health problem. And we have been living with public health issues because of this dreaded disease since March 2020. Yet here we have something totally independent, but it is a huge public health issue. And this is how our interest in this issue is really heightened. And we just hope for the best. And again, I don’t want to be premature. But you know, we all depend on water, drinking water, swimming water, cooking water. Well I mean, water is our life. And so we have a lot of worry.

Back to normal with relaxed COVID-19 restrictions starting December 1, while keeping an eye out for the Omicron variant

On December 1st, the day we lifted the restrictions, we really want to move forward – and understand that all of us, including me, have a little mental adjustment to make here to try to get some normalcy back into it, if you will, to our lives, given the long period of time that we have just been through. So you know, with the holidays coming up and trying to open up, we really don’t want people to live in fear. I want people to be careful. We always want people to be careful. I think our local people will be like that, as evidenced by the wearing of masks we see. And also the percentage of vaccinations and the continuous increase in vaccinations, especially among our most vulnerable.

On the thought process behind changing the COVID-19 rules

Let me be very clear on this, first of all, everything that we have done, to reduce or eliminate the restrictions, has been done in consultation with the best doctors in the state. It wasn’t done in the void of my office, or something capricious, or done on a whim or whatever. I mean, it had to do with data, really unconditional science, and the opinions of really educated people in this area. So with that, we decided to go ahead, we felt pretty comfortable, we were pretty reassured, you know, looking at the penetration of the vaccinations, looking at where we were in relation to any our experience with the disease itself since March 2020. We’re in a completely different place and in fact the safest place we’ve been since really before Delta arrived. If there’s one thing we got from the Delta variant, it’s that we were at 60% in July, reaching only 60% of those vaccinated. Delta created a sense of urgency. We are now in a place where here in O’ahu our vaccination rates as a percentage of our population are tremendous.

We took a very favorable position after a lot of speeches, including even with the other mayors of the other islands to determine what their level of interest was, because it was inevitable. So we knew, first and foremost, that we had to restore, make sure we had an appropriate amount of money that would cover our city … around $ 45 million. Of course, this is not a static number, that number will be fluid as we go along, and then we considered the rest as a source of income. And the biggest other problem that we inherited, getting into office, and there was a lot, if you remember, in December the previous administration didn’t just blow up the PPP, which was a method funding and they fired their CEOs and other related people – but they also announced at the time that the rail would be finished in 2033, and that was a shortfall of $ 3.6 billion just to add , and that’s after, you know, its inception since 2004, 17 years later. And we come in, in the midst of the pandemic facing this.

What people sometimes forget is that we are under contract with the federal government. A full funding grant agreement, the FFGA, with the Federal Transit Administration to build the railroad to Ala Moana and if we can’t do that then there is a fine to pay or even possibly – when I well i mean they currently hold $ 744 million. They could restrict those funds, they could actually ask for a clawback in the event of breach of contract. So you can’t be a cavalier when you’re under contract with the federal government for something like that, despite all the missteps that have happened, and no one here is making excuses. I am the fourth mayor on this project, and this project will survive my term, so there will even be a fifth mayor. And so at the end of the day we looked at that and said, okay, that made a lot of business sense. I have no idea or understand why someone would object to this, we are staying the course on operations. We take the excess money. In fact, we are even taking 0.25%, along with other money from the budget, to reinvest in our natural resources.

This interview aired on The Conversation on December 2, 2021.

Forgetting these items could cost you dearly