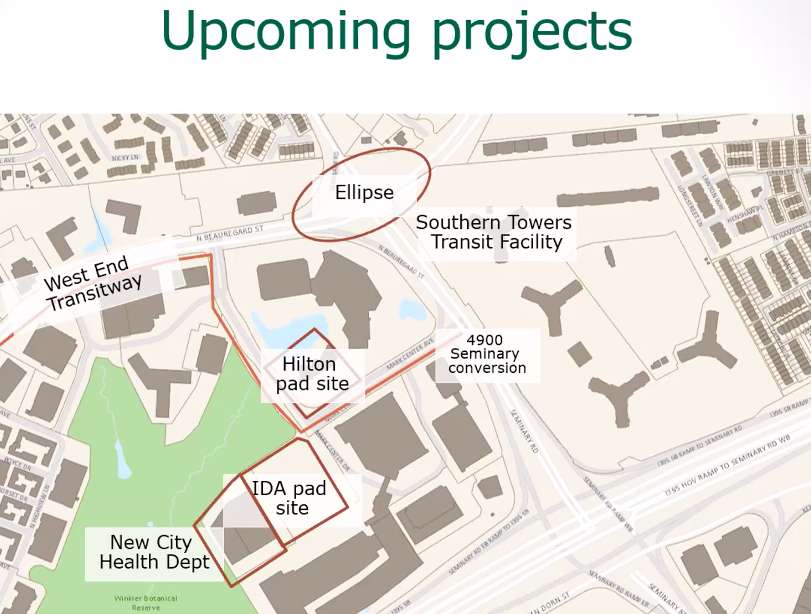 Right after the King Street 100 block discussion last night, the Planning Commission approved a zoning text amendment that could allow some West End developers to make better use of the Mark Center site.

At the meeting, land use attorney Kenneth Wire represented the Mark Center Hilton and the Institute for Defense Analysis (IDA), two landowners at the site who lobbied for underutilized land around of the Mark Center be reassigned. Wire said the hotel owners were hoping the sale of part of the property, especially a plot near a stormwater retention pond, could help fund a facelift for the very dated Mark. Center Hilton.

“This corner site, right in front of the future [bus-rapid transit] station, this is an underutilized site and frankly could be a higher and better use than a smaller ancillary use for the building, â€Wire said. â€œIt could create value to improve and improve the hotel. It does not currently meet the brand’s standards, it was built in the 1980s. This sale will be reinvested in the hotel.

In addition to the Hilton site, part of the Mark Center IDA complex may also be put on the market. The IDA plot was originally intended to be an office building but never saw the light of day. Both plots have been approved for rezoning which could turn them into residential or mixed-use developments.

Wire said there are currently no plans on what will happen with the land once the properties are rezoned, but the rezoning will help owners bring the plots to the market for future development.

During the discussion, planning commissioners also questioned whether more could be done to integrate the Winkler Botanical Reserve into the site, but staff said the West End greenery was privately owned.

â€œThere is an opportunity for this to serve the community more broadly by being more open and accessible,â€ staff said, â€œbut it’s a private conservation group overseeing the area and it has been difficult to oversee the discussions. . “