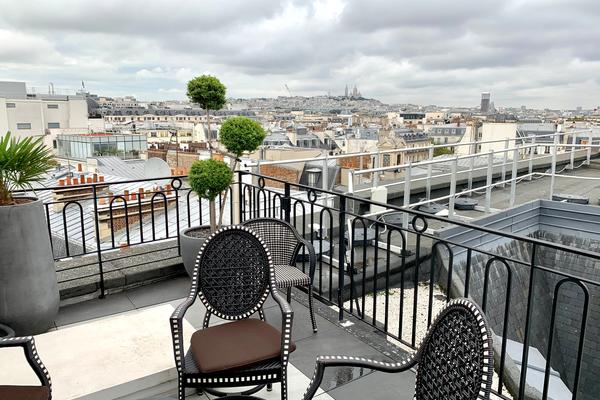 Maison Astor: Intimate and warm accommodation in the center of Paris

Paris is one of the most visited cities in the world, and the variety of Parisian hotels is fascinating. From grand palaces to moderate inns and luxury arena-sized apartments reserved for long-term visitors, the accommodation options in the City of Light suit virtually every taste.

Travelers looking for a slice of American comfort on a quiet street in the city’s 8th arrondissement need look no further than Maison Astor Paris, Curio Collection by Hilton.

Opened in 2018, this hotel is located in front of an office building, away from the traffic of the main avenues. This is a good location for a dwelling house – and a dwelling house it was. Built in 1907 by American developer John Jacob Astor IV, who, enamored with the energy of the early 20th century in Paris, and amused that the name of the rue-Rue d’Astorg-was surprisingly similar to its own surname , decided the location was perfect.

Astor, whose developments in New York include the St. Regis and Knickerbocker Hotels (which still stand today) then took refuge in the completed mansion during an extended honeymoon after his scandalous divorce in 1909 and his remarriage with a younger woman. The couple fled the stifling environment of New York society (called “The Four Hundred” because that was the exact capacity of their mother’s ballroom) and spent the winter of 1911/12 in Paris and Egypt.

During the trip, the new Mrs. Astor found out that she was expecting and wanted to give birth in America. The Astors and their entourage embarked in Cherbourg for New York in April 1912 aboard a brand new liner. That ship was the RMS Titanic, which, along with JJ Astor, never reached New York.

It is the story of those exciting early days that inspired the development of the Maison Astor hotel more than a century later. Completely renovated, the mansion still feels intentionally intimate, like the private home it once was. The lobby is furnished like a plush living room, where check-in is done from the comfort of a padded sofa.

Equally intimate is the restaurant, bathed in light and lit by a glass roof, with its impressive chandelier. Having breakfast there is like a meal with friends – it almost makes you want to ask other guests how well they slept.

Touches of the Astor era remind guests of the building’s heritage. JJ Astor himself looks at guests from modern pointillist portraits in the hallways, and there’s even a library dedicated to their beloved dog, Kitty (who also perished on Titanic). It was almost meta that I had arrived at Maison Astor by a train from Cherbourg, the French port where Astor’s entourage was located, including two servants and a private nurse. I took a peek at the countryside imagining what it must have looked like in 1912, wondering if any of the richest men in the world had paid attention to what was going to be one of his last. glimpses of the earth.

In addition to the delicacies of Paris right outside the hotel (it’s conveniently located near the high-end boutiques on rue Faubourg Saint-HonorÃ©), there’s also the joy of languor. The hotel bar spills out onto the sidewalks, where diners graze on sumptuous American-style plates (I had to check with my server that the generous portion of homemade smoked salmon was indeed half an order) and cocktails. Prohibition style.

The rooms are intimate (it’s Paris, after all) but not as compact as many hotels in the city. Many overlook the interior courtyard and overlook the dining room with glass roof; others have a view of the street. The best views of the city are from the hotel’s two townhouse-style rooftop apartments whose terraces overlook the Eiffel Tower or the SacrÃ©-Coeur Basilica, making them popular for intimate events. All rooms have a bathtub stocked with Sothys toiletries for an extra Parisian touch.

With a residential and intimate feel to the accommodation, it feels more like a big house than a hotel, but the Hilton’s charming international staff ensure a memorable stay by international standards in the heart of the City of Lights.

In the absence of a reservation for an apartment on the roof terrace, the amenities of the hotel’s public spaces are resolutely Parisian and undeniably form part of the â€œI’m in Parisâ€ moments.

The nearest metro station is Saint-Augustin on Boulevard Haussmann.

The hotel has a laundry service available six days a week.

For the latest travel information around the world, check out this interactive guide:

For the latest news, updates and travel deals, be sure to subscribe to the TravelPulse daily newsletter here.