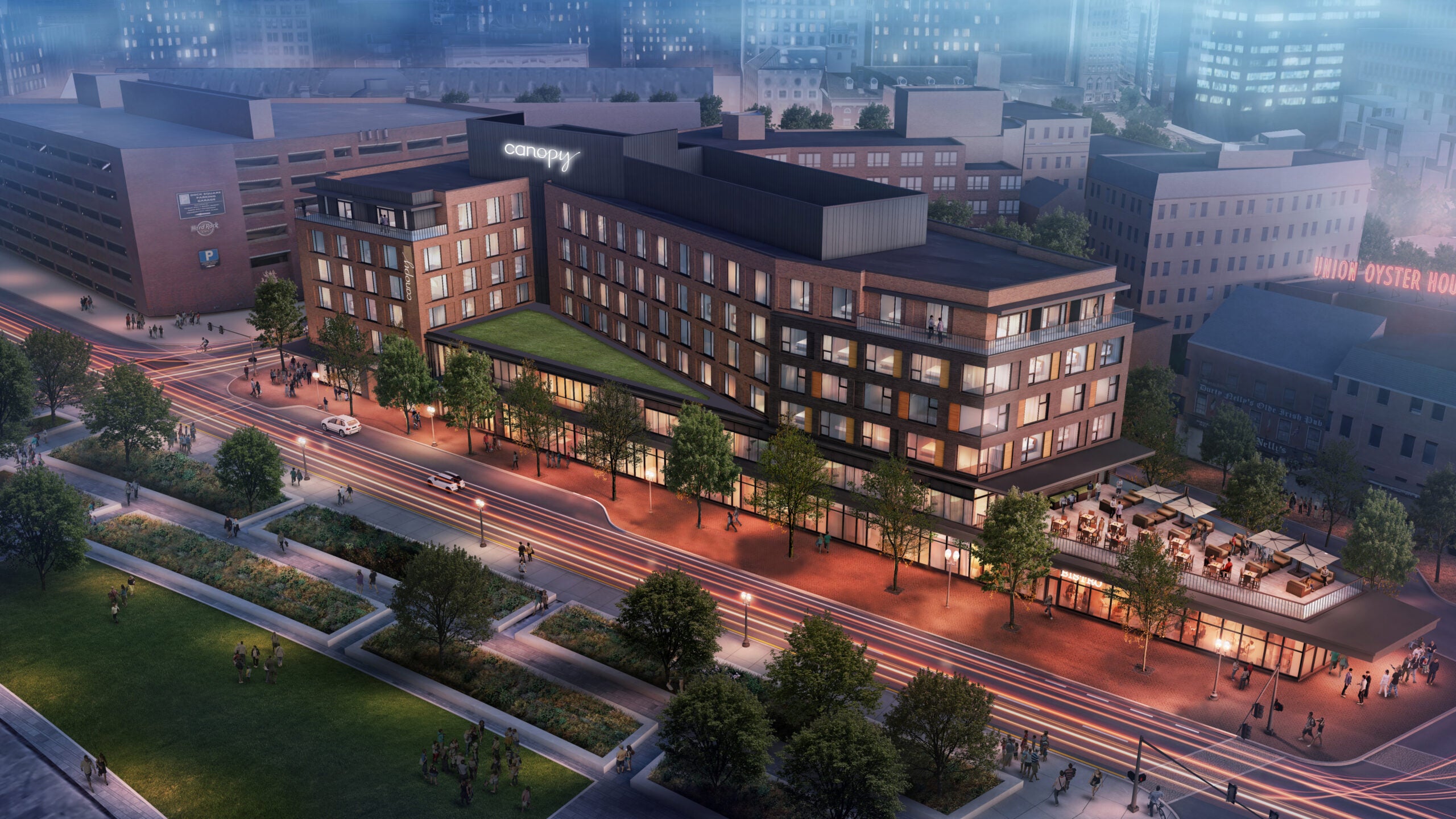 The opening of a new boutique hotel in the city will provide a contemporary getaway steeped in Boston’s rich history.

Canopy by Hilton, Hilton’s first lifestyle brand, is designed as “a natural extension of its neighborhood,” according to the company. The first Canopy by Hilton opened in Reykjavik, Iceland in 2016 and there are currently 32 Canopy properties open globally and 29 under development in 15 countries and territories.

The 212-room Boston hotel, developed by CV Properties, Harbinger Development and Olshan Properties, will feature two restaurants, more than 3,000 square feet of meeting and event space and an on-site fitness center. Hilton did not provide the cost of the project.

“We’re going to differ from the full-service Hilton hotel you’ll find in Back Bay or the Financial District,” said Rob Rosenblatt, the hotel’s general manager. “We’re going to have more elements of the local vibe of our neighborhood, of our community.”

Rosenblatt called the hotel area “the beating heart of Boston”.

“We are close to many historic sites such as Faneuil Hall, Quincy Market, the Old State House,” he said. “The Freedom Trail passes right in front of the hotel on Hanover Street.”

The hotel’s exterior “links to much of the architecture of the North End and some of the oldest buildings at Union Oyster House,” said Brittany Grammer, director of sales and marketing for the hotel. ‘hotel.

The hotel’s 212 rooms include four suites and five balcony rooms.

“All of our balcony rooms are on the top floor with incredible views,” Rosenblatt said.

Guests can sip their morning coffee on the wraparound balconies while enjoying views of the Greenway, North End, Zakim Bridge, TD Garden and the Bunker Hill Monument, Rosenblatt said.

Inside the hotel, designers sought modern ways to display Boston’s past.

The hotel’s artwork includes modern images from the revolutionary period that are pixelated. The cast-iron main staircase was inspired by the city’s ironwork, including its North End fire escapes, Grammer said.

Even the room numbers got the Boston treatment.

“The room number font on the outside of all doors is an exact replica of the font inside the Quincy Market atrium,” Grammer said.

The bedrooms have king and queen beds with Serta mattresses and memory foam. The rooms with neutral colors are done in blue, gray, bronze and wood. Other little touches: Nespresso machines and a refrigerated drawer.

A custom Boston canvas is featured throughout the hotel, from hallways to guest rooms, with scenes that blend historic figures with modern Boston life. The print is most evident in the signature canopies above the bedrooms’ beds. The design is specific to the Boston location and is the first Canopy by Hilton with canvas awnings as a nod to canvas sails, Grammer said.

Taking a closer look at the canvas, Grammer said guests will notice the following: “Ben Franklin is actually holding a cannoli – I like to say Mike’s, some people will say Modern – but he’s holding a cannoli in reference to the North End. There’s George Washington running the Boston Marathon just outside our block, so he’s running right outside the Union Oyster House. Abigail Adams sits on a couch watching the Patriots play football and watching them on a flat screen TV. And then there’s the Harvard rowing team rowing with the USS Constitution in Boston Harbor. It’s kind of old and new.

Bedroom bathrooms have walk-in showers with classic white ceramic subway tiles and durable Thankyou toiletries. The bathroom tiling is inspired by a New England-style quilt from a painting by Norman Rockwell, Grammer said.

Hungry patrons can dine at two restaurants: Rose Town Kitchen & Bar and an as-yet-unnamed restaurant that will open in the fall.

Rose Town Kitchen & Bar, a casual brasserie-style cafe, is located on the second floor of the hotel. It will serve New England classics for breakfast and dinner, and eventually lunch and brunch, Rosenblatt said.

Rosenblatt called the sharing plates “high-quality snacks” and said customers could choose from pizzas (called pies), as well as seafood, beef, chicken and vegetarian dishes. The bar will serve classic cocktails with local craft beers on tap and international wines.

“It has a horseshoe-shaped bar, which is another nod to the neighborhood — to the original Union Oyster House first-floor bar that has so much history,” Rosenblatt said.

When the restaurant’s windows open during the warm months, customers will be able to enjoy an outdoor experience on the greenway, Rosenblatt said. He predicted that the bar stools along the window wall will be “highly coveted”.

“It will be a unique and vibrant restaurant that will be exciting for people to come and explore,” he said.

A second restaurant with a rooftop terrace will open in the fall, Rosenblatt said.

The hotel will include more than 3,000 square feet of meeting and event space with floor-to-ceiling windows and plenty of natural light, Grammer said.

“We’re using both traditional meeting rooms, in the sense, as well as more common space, but elevating it to a reception-type venue,” Grammer said.

Guests looking to exercise will find Precor exercise equipment and Peloton bikes in the 1,400-square-foot fitness center with 9-foot ceilings.

To help you plan your adventures around town, there’s a 24-hour concierge service and Canopy bikes for exploring.

Guests arriving early or departing late can take advantage of the hotel’s transfer lounge, Rosenblatt said. This is an area where guests can store their luggage in a private locker. They can use restrooms and showers and enjoy access to the hotel’s gym and other amenities, he said.

Travelers with dogs can participate in the hotel’s “Paws in the Neighborhood” program, which includes special treats for four-legged visitors as well as dog-centric programs.

Rosenblatt said Canopy by Hilton Boston Downtown provides an uplifting story after the hardships its industry has faced over the past two years during the coronavirus pandemic.

“Here we’re coming out of COVID and everything that’s happened in our industry with layoffs and furloughs and closures and being able to say, ‘We’re here with positive energy, new energy, and bringing a whole new hotel produced with an exciting brand in one of Boston’s most unique and historic neighborhoods,” he said.

“We’re absolutely thrilled because, although we haven’t gotten back to where we were before the pandemic, every month we’re moving a little bit in the right direction,” Rosenblatt said.

Visitors come to the city on weekends, he said, but the industry is waiting for offices to reopen and businesses to return, which will bring more midweek business.

“We are really excited about what we have to look forward to this summer because we feel like coming on the other side of all this pandemic, on top of all the tourism and pent up demand, people are still coming in record numbers this summer,” Rosenblatt said. “And it will only get better as new things open up and restrictions start to be lifted.”

How to get to Boston

Get the best in town, delivered weekly to your inbox.