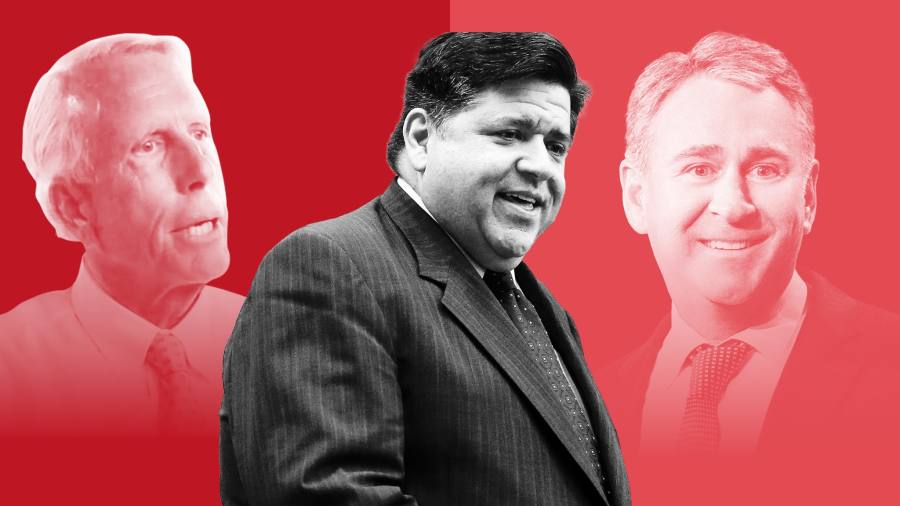 When hedge fund billionaire Ken Griffin decided to throw $50 million of his own money behind a candidate to unseat a fellow billionaire from the Illinois governor’s mansion, the scale of his spending should have made it a surefire plan. .

Only problem: a rival Republican billionaire had the same idea. Today, the race pits three of the wealthiest men in American politics against each other and has come to symbolize the new trend in state-level political races – candidates funded by a single wealthy, highly motivated donor.

The incumbent, Democrat JB Pritzker, is an heir to the Hyatt hotels fortune who self-funded his campaign to the tune of $125 million. Republican Richard Irvin, traditional mayor of the state’s second-largest city, is backed by Citadel chief executive Griffin. And his rival for the Republican nomination is Darren Bailey, a far-right senator who received more than $9 million from GOP megadonor Richard Uihlein.

While Uihlein injected far less into the race than Griffin and got involved at a later date, it is Bailey, backed by Uihlein, who is 15 points ahead of Irvin, according to a new survey of likely Republican voters in the June 28 primary.

The election is on track to be the most expensive gubernatorial race in US history, according to OpenSecrets, the nonpartisan watchdog group.

It will also be a litmus test of how influential individual donors can be by writing a big check to support a candidate early in the race – a trend that has grown since the Supreme Court lifted funding limits. campaigns in 2010. Traditionally, billionaires like Uihlein, a shipping supplies magnate, and Griffin, would channel their donations through party committees and PACs, which would then choose candidates to support.

Griffin and Uihlein aren’t the only ones taking the direct route. Tech billionaire Peter Thiel recently made a habit of writing $10 million and $20 million checks to right-wing midterm candidates long before their primaries.

Even in this small universe of multimillion-dollar individual donations, Griffin’s donations have drawn attention. “I’ve never seen anything like it,” said a Republican fundraiser.

Prior to the Supreme Court ruling, political donations were capped at thousands of dollars. “If a corporate PAC donates $10,000 in a cycle, that’s huge. You have this candidate’s ear, you have almost unlimited access,” the Republican fundraiser said. With Griffin giving away tens of millions: “The amount of power he has is unbelievable.”

So far this cycle, Griffin has donated more than $65 million to largely Republican candidates at the federal and state levels, according to data from OpenSecrets. In the 2020 cycle, it has given more than $180 million to state and federal candidates, while in Illinois it has pumped $179 million into races since 2002, according to data from the Illinois Board of Elections. State of Illinois.

While Illinois is a reliable Democratic state in presidential elections, there is much more competition at the gubernatorial level. The state behaves like Massachusetts, Vermont, and Maryland — all blue strongholds that regularly elect Republican governors. Of Illinois’ six governors since 1991, half have been Republicans, including Pritzker’s predecessor, Bruce Rauner, another multi-millionaire turned politician.

For Griffin, the state’s richest man, running for Illinois governor is personal. In November 2021, he told reporters he would go “all-in” to financially support the candidate he thought had a chance of defeating Pritzker, with whom he clashed over tax regulations and the police.

“Richard Irvin is the exact opposite of JB Pritzker,” Griffin told the Financial Times. “As mayor of Aurora, Richard has been successful in addressing the issues that matter most to Illinois.”

Pritzker, by contrast, has failed to curb “the senseless violence and corruption engulfing the state,” Griffin added, insisting the incumbent – whose sister Penny was Barack Obama’s Commerce Secretary – has “focused on its own political image and ambitions”.

Representatives for Pritzker and Uihlein did not respond to requests for comment. Bailey’s campaign noted that the state senator had the support of more than 20,000 volunteers, in addition to Uihlein’s financial support. Irvin said a vote for Bailey, whose right-wing views and hardline anti-abortion platform could turn off the state’s millions of moderate voters, is a vote for Pritzker.

“It’s like two bullies in a playground,” said Chris Mooney, a political science professor at the University of Illinois at Chicago, referring to Pritzker and Griffin.

A Democratic strategist involved in Illinois politics called the Republican primary “surprisingly intense,” warning that the general election could be too, despite the money Pritzker himself poured into his campaign.

“Money can’t buy everything, and Pritzker shouldn’t be seen as a sacred cow that can never be defeated. He obviously can,” the strategist added.

Illinois has long had a tradition of colorful – and sometimes corrupt – political figures, many forged in the harsh world of Chicago’s bare-knuckle campaigns where labor unions, real estate developers and a handful of political dynasties vied for power. domination. Griffin, Uihlein and Pritzker change that.

“The typical machine politics that dominated the money game . . . has now been replaced by a handful of billionaires,” the strategist said. “It may reduce corruption, but I don’t know if it’s best for democracy.”

Despite the growing number of candidates getting a single billionaire backer — as well as billionaire candidates self-funding their campaigns — it remains unclear whether the funding model is a path to success.

“When you have a candidate who gets most of their money from a specific person or group. . . it’s not the same as getting money from a wide variety of voters,” said Pete Quist, deputy research director of OpenSecrets.

Most donors who are willing to give candidates small contributions are also more motivated to vote, Quist added.

Todd Maisch, chief executive of the Illinois Chamber of Commerce, said he viewed the billionaire’s political model as unnatural and unsustainable and believed Irvin’s inability to gain traction despite Griffin’s backing was “the end of billionaires deciding what will or will not happen in Illinois”.

Others are less optimistic. ” I do not think so [the billionaires] are going to disappear, ”said another Democratic strategist. It may just “take a while before they get to a place where the workforce [unions have] been in Illinois”.