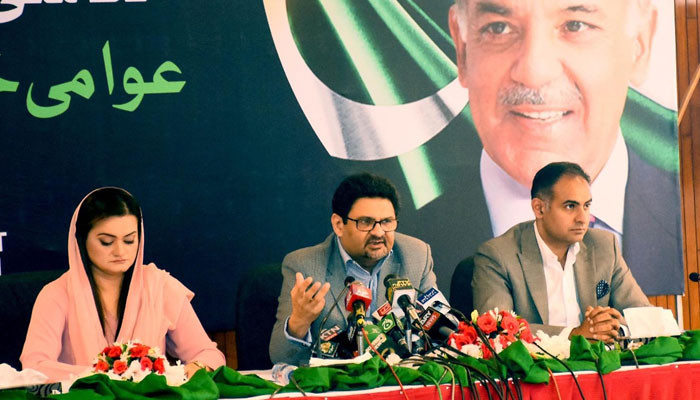 ISLAMABAD: Finance Minister Miftah Ismail said on Saturday that friendly countries would fill the IMF-assessed financing gap of $4 billion out of a total external financing need of $35 billion.

At a press conference on Saturday, the finance minister said, “I’m going to show you the closing of that $4 billion IMF-assessed gap for the current fiscal year in July. We expect a friendly country to provide a $1.2 billion deferred payment oil facility.

Another country will invest between $1.5 and $2 billion in equity on a government-to-government (G2G) basis. Another friendly country will provide us with deposits in the form of cash and special drawing rights (SDRs). Another friendly country will supply us with gas in deferred payment. He shared with the media the dollar inflows expected from friendly countries without naming them. He also did not share specific information on expected dollar inflows from friendly countries, but official sources confirmed that Pakistan was considering an additional $1.2 billion oil facility from Saudi Arabia in deferred payment. Pakistan is also expecting $1-2 billion from him in the form of SDRs or cash and Army Chief of Staff General Qamar Javed Bajwa plays a key role in this. Pakistan is negotiating an RLNG from Qatar on a deferred payment. Islamabad is also holding talks with the United Arab Emirates to secure $1.5 billion to $2 billion in equity investments through the G2G deal.

Accompanied by Minister of Information and Broadcasting Marriyum Aurangzeb, the minister said he would commit to bringing inflationary pressure down as it would not remain at 21.3% in the coming months and there would have no shedding next summer in Pakistan. “The government filed a petition for review with the National Electric Power Regulatory Authority (NEPRA) as Prime Minister Shehbaz Sharif wanted to protect 100 unit users from the Rs 7.91 per unit tariff hike basic,” he explained. On the gas tariff, he said that it was not part of the IMF conditions and that a 300% increase in tariffs had been proposed for wealthy consumers. “The ECC has returned the summary to the Ministry of Petroleum with the order to make some changes but its notification has not yet been published,” he said.

The Minister was optimistic that the energy import bill would be reduced from $3.7 billion per month in June 2022 to $2.7 billion in July 2022, representing a savings of $1 billion. dollars. “This saving on a monthly basis in line with conservative estimates will save $6.5 billion which would help the rupee appreciate against the dollar,” he said and added that the rupee had appreciated by against the euro by 5%, the pound by 1.5% and the yen by 1 to 1.5. pc but depreciated against the US dollar due to its strength against all other currencies. The IMF deal, he said, would help stabilize the exchange rate, but added in the same breath that he did not want to speculate on the currency.

Asked about the multi-billion dollar loans expected from multilateral creditors after the signing of the staff-level agreement with the IMF, he said the AfDB would provide $3.5 billion and the World Bank $2.5 billion. dollars as well as 500 million dollars will be provided by the Asian Infrastructure Investment Bank (AIIB) during the current financial year. The Islamic Development Bank, he said, would also provide funding.

He said Pakistan had avoided default and had not followed Sri Lanka’s path. He said POL prices had reached Rs 450 per liter in Sri Lanka and people had to queue for five days to get a liter of petrol and diesel. “There is no power to run hospitals in Sri Lanka,” he added.

He said air fares and Pakistan Railways fares had come down after the POL price reduction. “The government has passed all the benefits on to consumers and will do the same if prices fall further in the international market,” he added.

He criticized the performance of the PTI and called Imran Khan a ‘liar’ and said his incompetence had pushed the country to the brink of bankruptcy where the budget deficit has remained in the region of 3.5 trillion rupees over the past few years. last four years on average. . “It soared to Rs 5.1 trillion in the last financial year solely because of the irresponsible and misguided policies of the PTI-led regime. The public debt has increased by Rs20,000 billion in four years. The trade deficit reached an all-time high where imports hit the $80 billion mark. Imports were $30 billion, but now the government would hit the $35 billion mark,” he explained. He said the PTI government had not added a single megawatt to the national grid, abandoned long-term contracts in RLNG and other petroleum products and caused heavy losses to the economy.

“The RBF collection target of Rs 7.47 trillion will be surpassed in the current financial year. Subsidies will be reduced. Power sector losses have piled up to Rs 1.35 trillion in the last financial year, with the Ministry of Finance providing Rs. 1.072 billion to the Ministry of Energy and Rs. circular debt monster. Now the IMF has assessed the flow of circular debt at Rs 850 billion, of which more than Rs 600 billion has been cleared by the government through payments to PPIs,” he added.

He said there was a total billing of Rs 1.6 trillion to 1.7 trillion but the PTI led government had caused losses to the power sector in all aspects. Transmission and distribution losses could not be reduced while bill collection fell from 99% to 80%. “When the PDM government took power, there was a shortage of 7,500 MW. There is a circular debt of Rs 1.3 trillion on the gas sector. All these losses have pushed the country to the brink of default and the government has taken bold steps to avert the impending default,” he explained.

The minister said the government has imported 0.5 million tons of wheat so far and more wheat will be imported.