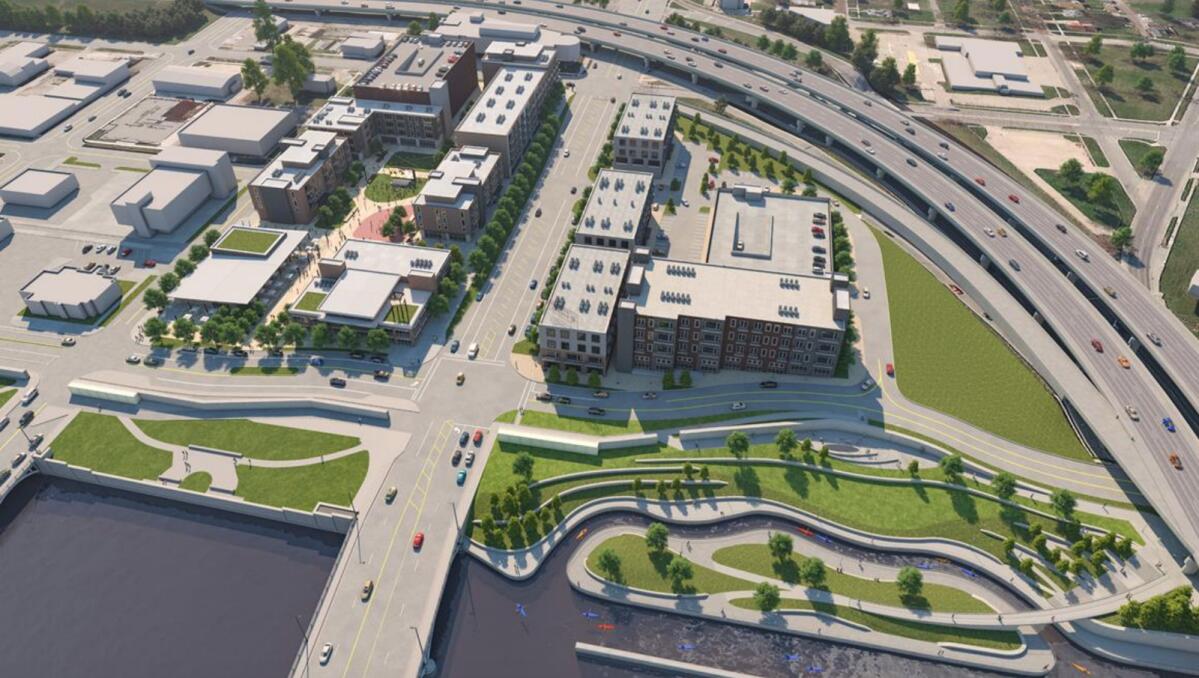 This rendering shows plans for the $81.5 million First and First West mixed-use development and the nearby 5-in-1 Dam Bypass on the Cedar River. (Courtesy of the City of Cedar Rapids)

CEDAR RAPIDS — A state panel gave final approval Friday to a $9 million award to Cedar Rapids that will spur development of the Cedar Rapids urban core, funding new recreational facilities and infrastructure that will support the growth of the region.

The Iowa Economic Development Authority Board of Directors approved the funds under the Reinvestment District Program, a competitive program that reinvests tax revenue from sales and hotel-motels generated over a 20-year period in projects that improve the quality of life and create or expand recreational opportunities. – ultimately attracting more people to a city.

“This $9 million will be critical to a number of downtown developments,” City Manager Jeff Pomeranz told The Gazette.

The development team consists of Joe Ahmann, president of Ahmann Cos.; Nate Kaeding with Build to Suit; and Big Grove co-founder Matt Swift, who Mason says have collectively invested between $180 million and $200 million in Cedar Rapids across multiple projects.

“We are very comfortable with where we are,” said city economic development manager Caleb Mason. “I think we’ve put together a project where we feel very confident with the role the city plays and the recreational components and just having a strong partner.”

Most of the millions IEDA has donated to the city will go to the $81.5 million First and First West mixed-use development that includes a Big Grove Brewery.

Cedar Rapids will specifically invest $6 million in a city-owned 550-space parking ramp to support the project. According to the development agreement approved in April, the city will not be obligated to begin construction of the ramp until there is at least $30 million in value on the site, equivalent to the completion of about four or five buildings.

And $1.5 million will go towards a 5-in-1 dam bypass channel with whitewater rafting and other water recreation on the Cedar River, a project estimated at $14.6 million. River recreation is a “longstanding and important priority of the city,” Pomeranz said.

Overall, city officials estimate the district will generate about $30 million in revenue.

The redevelopment of the Guaranty Bank Building and the Old World Theater site into Marriott hotels and the 25-story skyscraper near the Paramount Theater have been left out of the 20.58-acre district, although they were included in the original application .

City officials said these were not advanced enough to cut state funding.

IEDA board member Mark Kittrell said he recently visited Cedar Rapids and knew the panel had questions for city officials about “how the project was set up in in terms of the use of funds, what was actually offered and considered in terms of amenities here.”

In the end, he and the board unanimously supported the project.

“This is part of a much larger redevelopment project in downtown Cedar Rapids,” Kittrell said. “They have a lot of activity going on, and I think we’ve clarified what parts of the redevelopment in that area would be funded with that.”

When applications were first submitted in 2021, Kittrell said there wasn’t a lot of travel and little desire to build new hotels, so “there has been a shift in the way they consider the development of the hotel”. Having a hotel is necessary for cities to capture the portion of hotel-motel tax revenue that can be generated in reinvestment districts.

First and First West will include one — possibly two — hotels, the city’s Mason said. The flag for the hotel should be what is considered upscale by Smith Travel Research – essentially on par with the DoubleTree by Hilton or better, but it will be a smaller, more boutique hotel.

He previously told the board that the site’s main anchors – the Big Grove Bar and Grill and Pickle Palace – in place at the start “catalyze or attract further investment”, setting up the city to attract other hotels.

“They’re very pragmatic about it and I think they’re going to take it step by step,” Kittrell said.

“They are very methodical about how they do their development. They want to make sure they are getting funds before they issue bonds.

By the time the district begins in January 2025, Mason said there will be multiple buildings up and running on the site and city staff will be better able to see where the revenue is. The city will monetize the district’s additional revenue to pay off the debt at that time.

The reinvestment district price is dependent on the city’s proof of documentation of committed funding from: