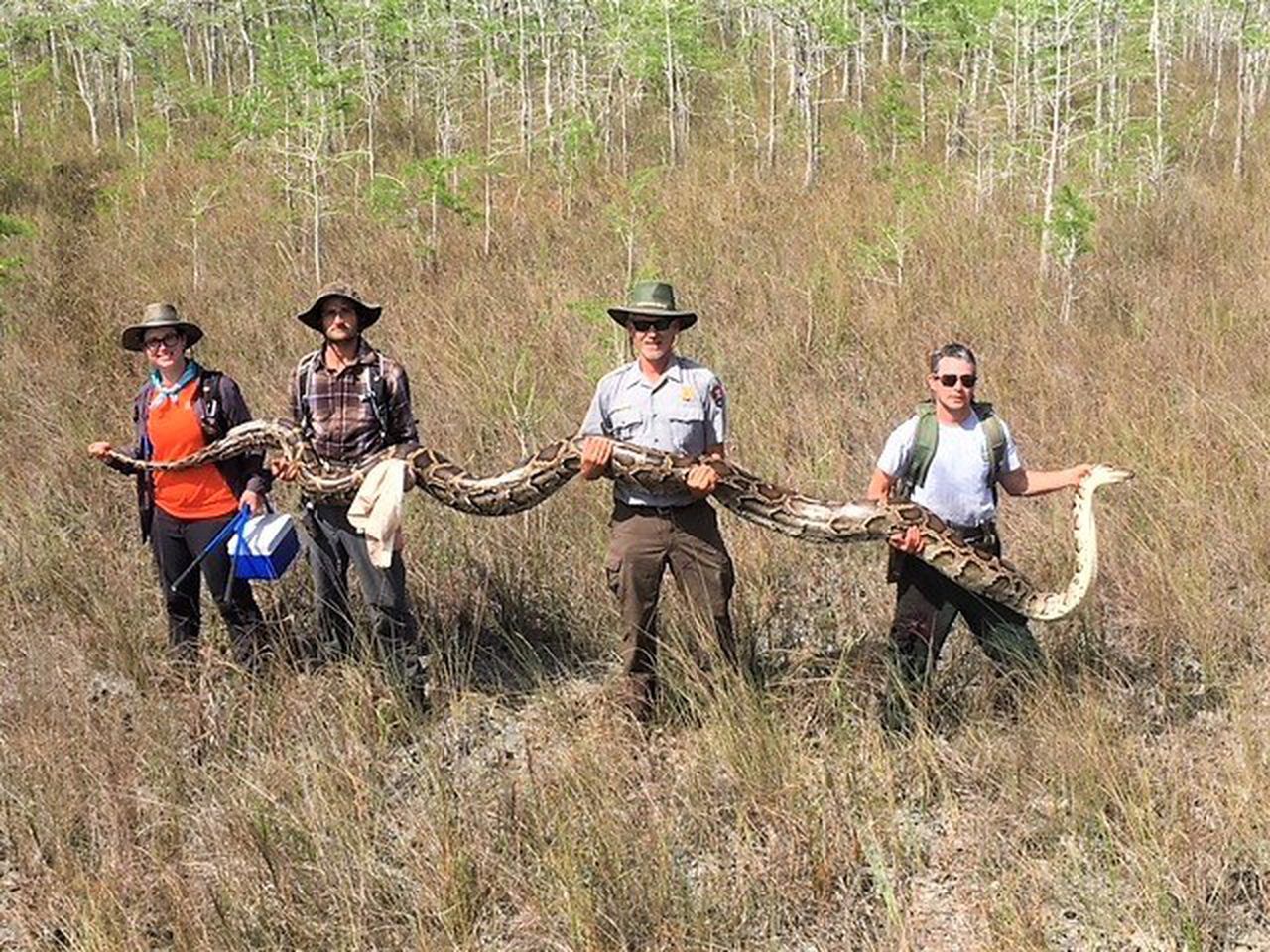 Another option to control the invasion of pythons in Florida: put them on your plates

A Miami native gave up her real estate job to become a full-time python hunter – and now she regularly eats invasive species.

According to a report by Sun Sentinel, according to Donna Kalil’s estimate, over the past three years she has probably eaten about a dozen pythons.

The Sun Sentinel cited Kalil, a python hunter for the South Florida Water Management District, who said that number did not include the python jerky she eats several times a week, when ‘she takes him with her on python hunts.

Florida state officials would love to see more Floridians follow Kalil’s lead, by putting python on their menus – just as another way to help control python numbers, according to the Sun Sentinel report. .

Burmese pythons, an invasive species in Florida, are top predators with insatiable appetites, according to the report, which in environmentally sensitive areas like the Everglades wreak havoc in the food chain. The state has struggled to control the burgeoning invasion of pythons, which allegedly began after owners released them into the wild, the Sun Sentinel reported.

The report quoted Carli Segelson, spokesperson for the Florida Fish and Wildlife Conservation Commission, who wrote in an email: “We would like to use consumption as another way to encourage people to remove pythons in Florida if the meat is good to eat. adding: “The study will help ensure that it is safe.”

The report quotes Kalil who said the meat is “chewy and tough if you don’t prepare it properly,” adding that the pressure cooker makes it more tender.

To describe the taste, the report quotes Kalil, who said, “I don’t really mean like fish because it’s more of the texture of fish, but it definitely doesn’t taste like fish, it tastes more like fish. the taste of chicken.

There are concerns regarding the consumption of python.

There are fears that python consumption may subject humans to unsafe levels of mercury, a dangerous neurotoxin, and the state has started looking for the potential problem, according to the report.

According to the Sun Sentinel, in order to determine whether pythons contain levels of mercury unsafe for human consumption, the Florida Department of Health is working with the Florida Fish and Wildlife Conservation Commission to perform tissue samples on the pythons.

If the mercury levels are determined to be safe, the python can be prepared in a number of ways. Kalil suggests that python is “good in chili,” and she likes it in stir-fries, too. But the Sun Sentinel reports that Kalil’s favorite way to eat python “is to pressure cook it for 10 or 15 minutes, sauté it with onions and garlic, and add it to pasta and with sauce “.

What is determined to be a safe level of mercury?

The Sun Sentinel cited the Environmental Protection Agency and the Food and Drug Administration as saying that “the safe limit for mercury is 0.3 parts per million.” In comparison, the report states that “some of the Everglades pythons recorded more than 100 times that level.”

According to Darren Rumbold, professor at Florida Gulf Coast University, “the pythons were in the hundreds of parts per million,” the report quotes.

The Sun Sentinel noted that a more recent study found that the mercury concentrations of pythons in southwest Florida, near and just north of Naples, were below 5 ppm.

Rumbold, who was among the study’s authors, said, “We have one of the world’s worst mercury problems in the Everglades and South Florida,” the report said.

“The reason is that precipitation carries pollutants from the air to the ground and the Everglades marshes convert the mercury into a form hazardous to humans,” the report quotes.