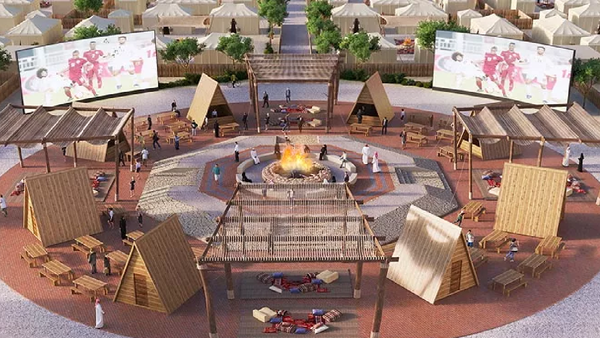 With less than 50 days to go until the 2022 FIFA World Cup in Qatar kicks off, fans looking to book last-minute accommodation deals can still get their hands on rooms aboard cruise hotels and in luxury hotels and fan villages.

According to the official tournament website, the availability of hotel rooms for the early stages of the tournament is still limited.

For all the latest headlines, follow our Google News channel online or through the app.

Qatar’s Supreme Committee responsible for the tournament’s infrastructure and governing body FIFA had previously held back the venues to prioritize teams, sponsors and their guests, royal guests, officials and fans who had booked hospitality packages.

With the World Cup approaching, several unassigned rooms are now freed up.

They include the Wyndham Grand Doha West Bay Beach – a 278-room resort near the Doha Corniche – and the St. Regis Marsa Arabia Island on the Pearl-Qatar – an island-wide resort

Budget hotels — starting around $160 a night — to upscale accommodations such as the five-star Hilton Salwa Beach Resort & Villas are still available, starting around $700 a night, according to the site. website. However, many hotels are now showing limited or no availability.

Chalet-style accommodation and laid-back camping are also still available ahead of the FIFA World Cup Qatar 2022. Fan villages are located on the outskirts of Doha but are still accessible by public transport or carpooling, and also include a variety of on-site facilities. such as a number of food outlets offering a range of cuisines.

Starting at $200 a night, options include Qetaifan Island Fan Camp – 7km from Lusail Stadium. It consists of 1,800 tents, each containing 2 single beds. Campers are offered free access to the adjacent Qetai-Fan Beach Festival, which serves “international drinks and features 50 restaurants and a supermarket,” according to the site. The fan village will also host “various international artists and DJs” at live concerts during the month-long football tournament.

Fan Village Cabins Free Zone, located four miles from the airport, also offers the choice of a double or twin room with private bathroom, sleeping up to two people, from $200 a night .

For a more upscale offering, Fan Village Al Khor – about 40 minutes from Doha – offers outdoor camping for fans in a style reminiscent of a traditional Qatari tent for around $420 a night.

Apartments and villas with services

The tournament’s official website said there were still Airbnb-style serviced apartments and villas for rent, with one- to six-bedroom properties available. Prices start at around $200.

Fans can also choose from at least two cruise ships with nearly 4,000 staterooms.

The hotel of the MSC Poesia cruise ship. (Provided)

The hotel on the MSC World Europa cruise ship – which features “an 11-deck state-of-the-art architectural dry slide, six swimming pools, 14 hot tubs and 13 restaurants” is still available, from from around $350 a night, as is the hotel of the cruise ship MSC Poesia, which will be docked at the Grand Terminal in Doha. Prices start from $180.

Fans will stay in neighboring countries

Around 1.2 million fans, roughly half of Qatar’s population, are expected to descend on the country during the event, but providing enough rooms for fans, teams and tournament staff has been a major challenge for Qatar.

Organizers have tried everything from cruise ships to desert camps to help ease pressure on accommodation.

Many fans are expected to choose to stay in Dubai, where there are around five times as many hotel rooms.